Too many pastors and counselors teach that lust is primarily a male problem. I hope they don’t really believe this, but sometimes it sure comes across that way. So where does that leave the women in our churches? How should they think about lust? And, for example, if lust has become a life-dominating sin struggle for a woman, and she is feeding and fulfilling her lust through pornography, is it safe for her to turn to a spiritually mature women in your church for help? Or has the way you teach left her feeling like she is alone in her struggle? If she does muster up the courage and humility to reach out for help, have you identified at least one wise, spiritual woman in the church who can counsel and disciple her? 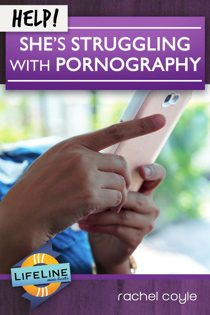 Drawing from a mini-book written by biblical counselor, Rachel Coyle, let me get the conversation started with an excerpt from HELP! She’s Struggling with Pornography.

“As women, things that entertain our imaginations attract us. Soap operas, romance books, television, movies, and magazine articles appeal to women. They tantalize our minds, conjure up secret fantasies, and ultimately influence our emotions. Unlike men, a woman’s sexual arousal is primarily connected to our feelings and emotions rather than sight. To overcome bondage to pornography, a woman has to be wary of anything that influences her emotions in such a way that she becomes sexually aroused. (That influence is reserved for her husband alone.)”

According to TechAddiction, women are not far behind men in their addition to pornography. But what is addiction? Tomorrow, I will let Rachel define it for us.

Get HELP! She’s Struggling with Pornography.

LISTEN TO THE WEEKLY PODCAST