“Abuse is a growing problem. In 2007 there were over three million reported cases of child abuse in the United States, involving as many as six million children. Estimates of the number of incidents of domestic violence range from just under a million to several million per year. It is estimated that one in four women has been the victim of domestic violence. While the overwhelming majority of victims are women, there has been a growing awareness of the many cases in which men are also the victims of domestic battering. Similar trends are observed in other Western countries, including Great Britain and Canada. Abuse also touches those who are not directly victimized, as children are traumatized when they see their parents ﬁghting. It is estimated that 70 percent of us know of friends and family who have been abused, 30 percent within the past year,” writes counselor Jim Newheiser in his helpful booklet HELP! Someone I Love has been Abused. 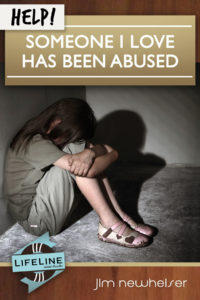 Does the Bible, which was written centuries ago, have anything to say to people who have been abused? Yes! God has given us principles in his Word that apply to all people living in every age. In Scripture we have examples of people who were abused. We also have an explanation of why people harm one another in this way. Most importantly, God’s Word speaks with compassion and hope to those who have been abused and gives them guidance as to how they can ﬁnd security in the Lord. This booklet equips the reader to offer compassionate biblical counsel to a victim of abuse. As well as providing practical instruction on how to help the victim gain safety and deal with the abuser in a biblical way, it points to the victory possible in Jesus Christ, who was abused for his people and who has compassion on all hurting people who turn to him.