[The following is adapted from a brief testimony that I shared at my installation service on August 16, 2015 at Cornerstone Community Church in Mayfield Heights, Ohio. I share it with you with the hope that it will encourage you to hang on to the promises of God by faith.]

A year and a half ago, when the Holy Spirit led me to take a break from pastoral ministry, we began to finish off a room in our basement that I could use as a place to think, pray, read, and write. As the room came close to completion, I found a picture that had been given to me as a gift when I received my master’s degree in 1998, and decided to hang it on the outside of my study door. I hung it there because I needed to see it every time I entered the room; I needed to consciously cling to a truth about my God. It contains the following verse from the book of Ephesians. 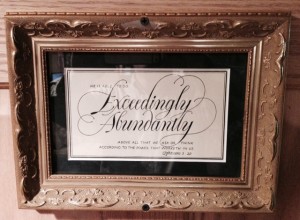 Now to him who is able to do far more abundantly than all that we ask or think, according to the power at work within us. (Ephesians 3:20)

This verse is a benediction I took hold of as a promise from God, which became an anchor for my weary soul. It is a key truth that my feeble faith gripped and would not let go of. Another promise that I clung to is found in Psalm 37:23, which had been displayed on of my bookshelves for 22 years: “The steps of a man are established by the Lord, when he delights in his way.”

During time away from pastoral ministry, I had met with our pastor several times. The first time he and I met for coffee, he encouraged me to write down the characteristics of the next church that I would want to pastor when the Lord’s timing was right. He firmly believed that if and when the Lord would lead us to a new ministry, both my wife and I would know it. As a result, I came up with 7 characteristics of a church that not only I would want to pastor, but, more importantly, a church that I believed would be good for my family. I jotted them down on a legal pad, which then got buried in one of the piles on my desk.

In January 2015, when my personal commitment to take a minimum of one-year to rest, evaluate, calibrate, and focus on specific needs in my family came to a close; I was not ready to intentionally search for a new ministry role. Many of my brothers in Christ encouraged me to get my resume out there, but I was not comfortable with that approach. There wouldn’t have been anything wrong with doing that, and many of my friends had been led by God through that means, but it was not how the Lord had led my wife and me in our past. Previously, He had gone before us each time and opened a wide door for ministry when we were not looking for it, when we did not expect it, and I believed He would do that again—in His time—if it was His will. And He did.

On January 21st of this year, Armand Tiffe (the founding pastor) and I both received the same email from a mutual friend at the Master’s College in California, Dr. Bob Somerville. Armand had contacted Bob concerning the senior pastor role that would be opening this summer at Cornerstone. Bob responded by introducing the two of us via email, affirming his belief that we would work well together.

Unbeknownst to Bob, I had just met Armand two months before, at a conference in Kansas City. Unbeknownst to Armand, Bob had become a friend and counselor to me over two years before. Bob was a brother who had suffered through long, deep valley of depression and was helping other men, like myself, who found themselves in the same valley. And unbeknownst to me, Armand Tiffe and his wife had talked on their way home from the conference about how they each had separately thought that I would be an ideal fit to be Armand’s successor at Cornerstone. That email from Bob got the discussion going, which led to a lengthy evaluation, interview, and candidate process with the elders and members at Cornerstone Community Church.

This past May, as I was packing up my library in our Wisconsin home, I found that legal pad with the traits of the church that I believed our family needed and that I would want to pastor. This is what I wrote: It would be a warm fellowship—a Bible-teaching, Christ-following, God-exalting, gospel-announcing, grace-dispensing, loving, and forgiving community of believers who desire to grow in Christ, together.

When I found that legal pad, I realized God had indeed kept His promises. Not only had He led our steps according to His good and sovereign plan, but He had also done exceedingly abundantly above all that we had asked for or thought possible.

I’m simply an unworthy slave of Christ who longs to one-day hear the Master say, “Well done.” I am a sinner who has been redeemed by the blood of Jesus, reclaimed by God for His purposes. My wife and I are so thankful for the faithfulness of the Lord in our lives and look forward to serving Him as part of the Cornerstone Community Church family.