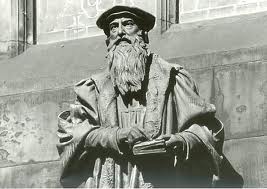 This morning, I had the unique privilege to attend two lectures given by my dear friend and brother, David Murray, who is the guest speaker for Grace Presbyterian Church’s annual reformation conference. David is a pastor in Grand Rapids and a professor at Puritan Reformed Theological Seminary.

In his first lecture, David gave us a brief sketch of the life of John Knox, the Scottish Reformer. Following this sketch, David drew eight lessons from the life and message of Knox.

Here is the link for the audio messages from the conference.