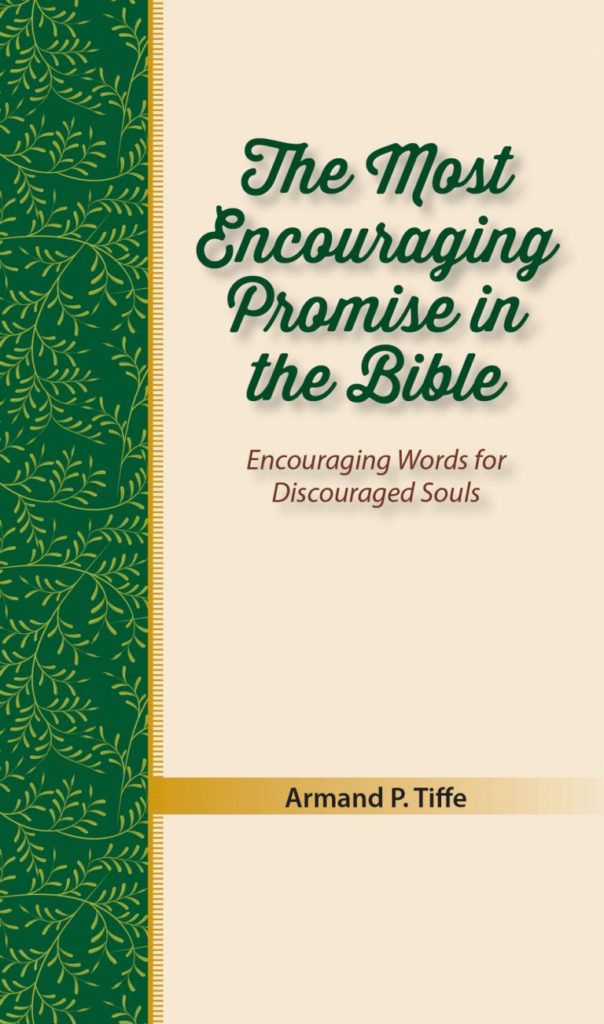 [Today’s post is written by Armand Tiffe and is a devotional message he gave at a pastor’s breakfast at Cornerstone Christian Academy in Willoughby, Ohio. Armand preceded me as the founding pastor of Cornerstone Community Church in Mayfield Heights, Ohio, and remains on staff as Pastor Emeritus, overseeing our counseling ministry and training center.]

Since I was asked to share a devotional to pastors, I cannot think of anything that would be more encouraging than what I consider to be the most encouraging and comforting promise in the Bible. It’s a promise made by God which has sustained me for 33 years of pastoral ministry. Life and ministry are hard and overwhelming at times; there are times we feel a sense of inadequacy in dealing with the pressures and problems. I have found this promise from God to be encouraging, comforting, and true; and hope you will too.

The promise I have in mind is found in Hebrews 13:5, For He has said, “I will never leave you nor forsake you.” It’s actually an Old Testament quote, a promise that God has made at various times. For example, God made this promise to Jacob when he was at a low point in his life due to adverse family circumstances. His heart was filled with regret over the past; he was facing loneliness in the present, and anxiety about his future (Genesis 28:15). God made the same promise to Joshua after Moses died and Joshua would be Israel’s new leader. He needed encouragement to lead the people, and God gave him the encouragement he needed with this great promise (Joshua 1:5). Now, in Hebrews, we see this same promise made to Christians. Some of them were under intense persecution and facing the stresses and afflictions that accompany it — being disowned by family and friends; loss of employment; loss of property; public mockery; imprisonment, and even martyrdom. As a result, many of them were very discouraged and; therefore we find sprinkled in the letter to the Hebrews strong words of encouragement to energize their faith.

It’s intended to energize our faith as well. This promise is meant to be an encouragement, especially during difficult times. Even though most of us in the U.S. may not have to face imprisonment for our faith, or martyrdom (not yet, anyway); we do face some persecution and some unique stresses that come with being a church leader. It’s in the midst of these times that God calls us to be faithful to Him, but He also wants us to know that He is faithful to us.

So, let’s reflect upon this remarkable promise by making an amplified version of a key verse. It’s a relatively easy thing to do. As you know, the New Testament was originally written in Greek — a technical language but also a very rich language. Many English words in the New Testament, when researched in a Greek dictionary, yield nuggets of truth; i.e., they amplify precious truths. You look up the word in a Strong’s Exhaustive Concordance, it gives you a richer understanding and you can make your own amplified version. Word studies are like windows in a house; they let in some light.

This promise in Hebrews 13:5 is like a gold mine and there are three nuggets I want to draw out of it for you. They are found in three key words: never, leave, and forsake. As we consider each of them, we’ll see how richly they amplify this precious promise from God.

The first nugget is found in the word “Never.”

Greek scholars tell us that never is not a bland word. It’s a compound of five negatives heaped together to confirm the promise. In other words, it’s like saying, “No, not, and never” five times. So, an amplified version could read something like this: I will never, no not ever, no never leave you, nor forsake you. It’s a gold nugget that reinforces and intensifies this great promise.

Furthermore, the force of this statement is even greater when we keep in mind that this is an actual quotation from God Himself. God wants us to have strong assurance of hope to the end (cf. Hebrews 6:11). It’s as if God is saying: “Declare the thought of My leaving or forsaking you null and void; abolish it from your mind; eliminate it from your thoughts.”

Let this great never burn into your mind like a branding iron so that you will never, no not ever, no never forget it. If you yield your heart to its truth, it will calm your fears and strengthen you to go on no matter what you are up against.

The second nugget is found in the word “Leave.”

The Greek lexicon tells us this word means “to leave behind; to let go; to abandon; to give up on.” When added to our amplified version it could read something like this: I will never, no not ever, no never leave you behind, abandon you, give up on you, or let go of you. It’s a tremendous promise, isn’t it? Let it burn into your soul and speak to your emotions. Its truth will steady you during the dark moments of life and ministry.

Perhaps you are thinking, “Then why do I feel abandoned by God at times?” It’s not uncommon to feel abandoned by God. It can happen while you’re in the midst of a trial or when something horrific happens to you. It can happen when you don’t seem to get the desired results for your labor in ministry or when some people are causing strife within the church. At such times your emotions may whisper “God has forsaken me.” However God clearly says in His Word, “I will never leave you, nor forsake you.”

So the question is, what’s happening at these times? Your emotions are lying to you. It’s at these times we need to call our emotions a liar and believe the truth of God’s Word. The Bible is filled with examples of leaders who have gone through great trials, adverse circumstances, and evil people plotting against them — Abraham, Joseph, Moses, David, Job, the Apostles, and even Jesus. Even though on the surface it appeared for a time that God had abandoned them, He did not. He was at work behind the scene bringing about His desired purpose.

For example, Jacob, whom I mentioned earlier, was at a low point in his life due to adverse family circumstances, and God assured him of this promise but did not immediately relieve him of the problem. Instead, God was working behind the scene, accomplishing through the trial His desired result for Jacob. Jacob emerged more humble, more refined in character, and with a greater faith in God. We need to get our thoughts in-tune with God’s Word, and it will stabilize us and give us hope.

The third nugget is found in the word “Forsake.”

I’m sure some of you have experienced the pain of being forsaken by others. People may treat us this way, but God will never treat us this way. Think about it, why would God forsake those who have cost Him so much already? Romans 8:32 assures us, “He who did not spare His own Son but gave Him up for us all, how will He not also with Him graciously give us all things?” He has given His Son as the atoning sacrifice for our redemption. He has given us His Spirit to renew us. Therefore, He will not abandon us nor leave undone the work He has begun in us. We are assured in Philippians 1:6, “He who began a good work in you will bring it to completion at the day of Jesus Christ.”

Now, let me give you a full-amplified rendering of the promise: I will never, no not ever, no never leave you behind, abandon you, give up on you, let go of you, leave you helpless, let you down, nor shall I ever relax My hold on you. This is a promissory note you can cash a thousand times. Remember this great promise, especially during the dark days of life. It may be during a financial setback, when anxiety over tomorrow wants to hold you captive. It’s a great promise to remember when you have to make a hard, yet right decision, when you have to go against the carnal thinking of church members or fellow leaders, when you are being unjustly criticized or misrepresented, and when your future is unknown.

“I will never leave you nor forsake you.” It’s a truth that will stabilize your thoughts and emotions. And once again, remember who backs up this great promise: For He has said… Behind this great promise is the all-powerful, all-knowing, everywhere-present God.

May this great truth give you hope, encouragement, and comfort!

I will never, no not ever,
No never leave you behind, abandon you,
Give up on you, let go of you,
Leave you helpless, let you down,
Nor shall I ever relax My hold on you.

An appropriate way to respond to this is to take a moment to bow in private prayer and thank God for this comforting and encouraging promise.

UPDATE (August 2018) – This teaching is now available as a booklet from Focus Publishing.