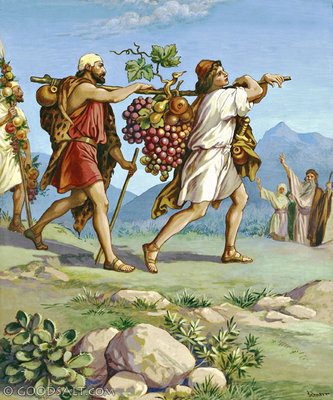 When I got saved in the early months of 1984, I met my wife a few months later. That fall we sang in a group called Lightshine. It was the musical outreach of a local Youth for Christ kind of ministry. Before I joined the group, they sang a song that I still hear her sing. As I understand, it was popular on Christian radio in the late 1970’s. The song was called Take another Lap around Mt. Sinai. The chorus went like this:

Go on and take another lap around Mt. Sinai
Til you learn your lesson
Till you stop your whining and you quit your rebellin’
Till you learn to stand in your day of testin’
By trustin’ and obeyin’ the Lord

That chorus pretty much sums up the book of Numbers—Israel taking laps around Mt. Sinai, waiting for 40 years of God’s judgment to take its course. On the positive side, Numbers is about the longsuffering and faithfulness of God to fulfill His covenant promise in spite of the people’s unbelief.

Out of 36 chapters in the book of Numbers, I selected chapter 14 to be part of our current sermon series because it illustrates a key contrast repeatedly found in the book: the contrast between living by fear and living by faith. When the twelve spies returned from checking out the land, the congregation had a choice to make. Who would they follow? Would they follow the two men with big faith in a big God, or the ten with little faith and a little God?

In the first half of the chapter, we find four truths illustrating the contrast between faith and unbelief. Take time to read and meditate on this passage of Scripture.

In the rest of the chapter we see God’s response to the intercession of Moses. The Lord would continue to move forward with the fulfillment of His promise, but He would also hold personally responsible those who acted in unbelief. The generation that acted in unbelief would die in the wilderness, while the ten negative spies would immediately be executed because they failed to take hold of the promise of God.

When we act in unbelief, God’s plan moves forward without us, and without His blessing. Don’t get me wrong. God’s work is not stopped, but it may be delayed from an earthly standpoint. If we are unwilling to live by faith then He will raise up others who are willing to do so and receive the blessings. Faithlessness is not without a price. The price is the loss of divine blessing.

The book of Deuteronomy contains three sermons Moses preached to the people as they wrapped up their 40 years of wandering, and were camped across the Jordan, ready to enter the land of promise. Through Moses, God placed a choice before them.

After their time in the wilderness, the surviving generation stood before another obstacle—the raging Jordan River. They had a choice to make. Would they embrace God’s promise by faith, or cower in fear of the unknown?

Today, a choice stands before you and me. We stand at a fork in the road. How will we live in light of the Word of God? Will we live by fear or faith?